The WFTU Lawyers Committee which represents the class-oriented trade unionist lawyers all over the globe, affirms its solidarity with Gilberto Solis, a Panamanian citizen and solidarity fighter with the Palestinian cause who was arrested in Panama, during a Book Festival, after having protested against the sale of books “stained with the blood of innocent Palestinians”. The young colleague, who is also a member of the Law Students’ Association of Panama and has never been accused of any crime, was arrested after having greeted the liberation of the young Palestinian Ahed Tamimi, who had been illegally imprisoned by the Israeli State.
According to the photos taken during the event, it can clearly be seen an individual taking photos of Gilberto without previous authorization of the National Police. His persecution constitutes a flagrant violation of his constitutional rights and shows, once more, the complicity of the imperialist governments with the criminal Israeli State policies.
The WFTU Lawyers Committee reaffirms its firm support with the Palestinian people and condemns the imprisonment of supporters of the just Palestinian cause for a free and sovereign state, within the 1967 borders and with East Jerusalem as its capital. 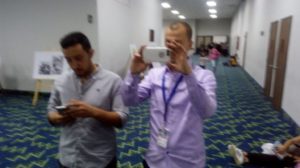